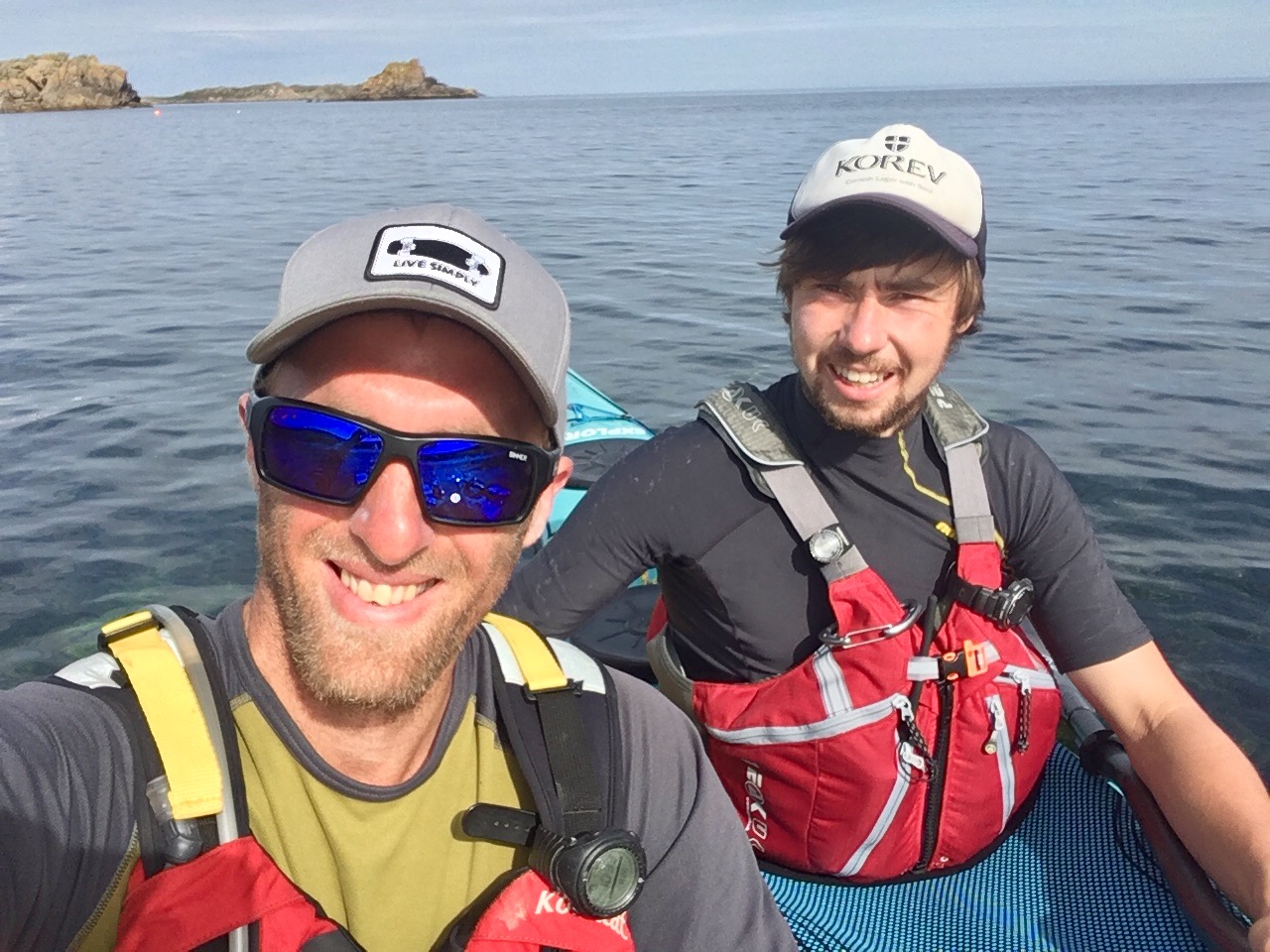 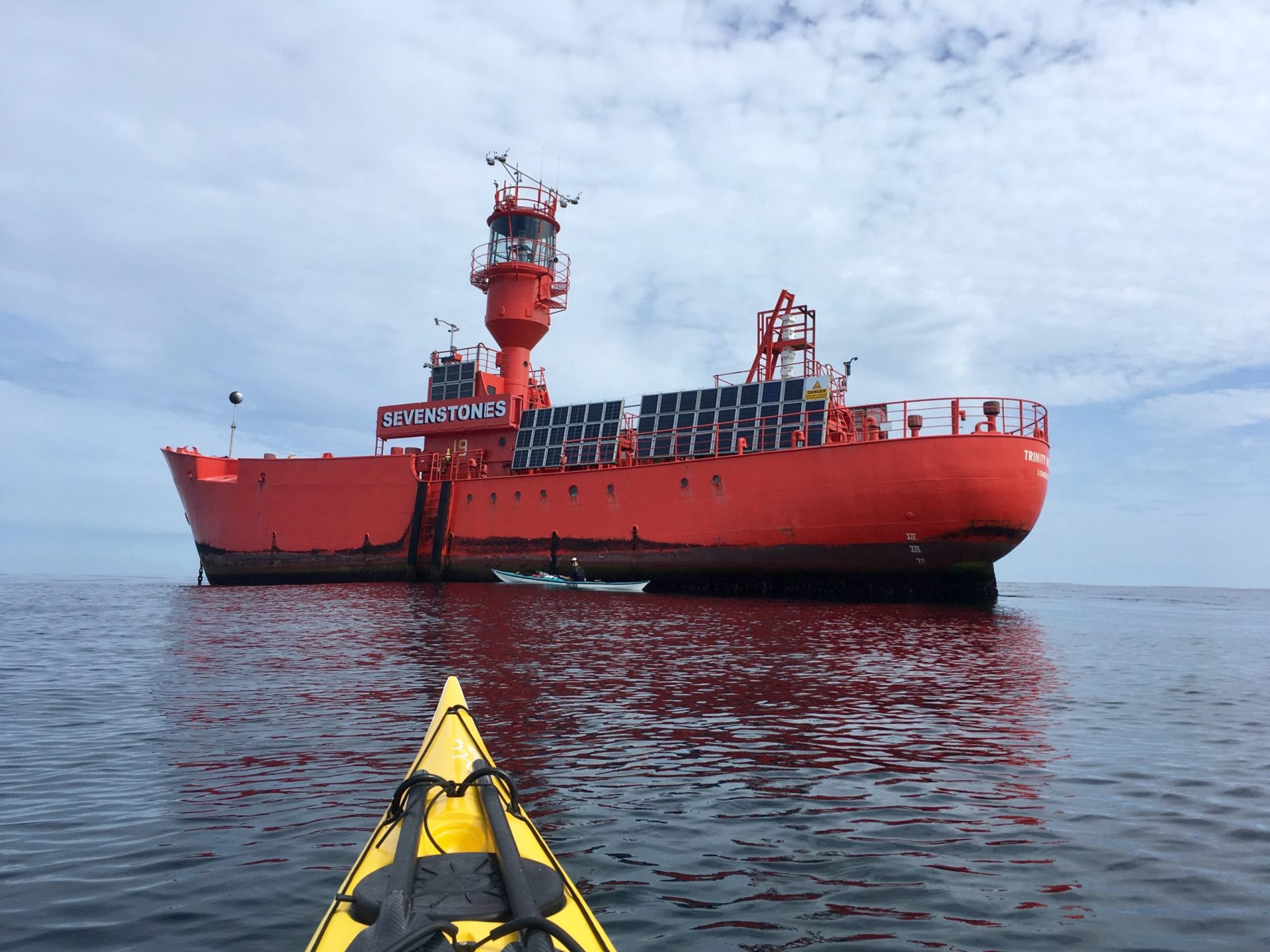 On a summers day a few years ago I was sitting in the van after a surf at Sennen and looking out to sea, I love surfing a board and I had caught a few waves but I sat there thinking.

A bit of a challenge and an extended adventure would be good, maybe I’ll paddle to the Scillies again in a few days. I checked the weather, its looking good but it looks like there is just one day which will work, is it possible to get there and back in a day? It must be!

I only know a few people up for a trip like that so I contacted my friend Glen Scott, a semi pro surf kayaker who paddles a little surf kayak called a spit fire.

After a conversation with Glen on the phone, he said; “Yeah cool, lets do it!”

So that was that.

I planned the route and we sat at Sennen carpark at 7.00pm. We set the boats up, ate some chips and tried to get a couple of hours sleep. The plan was to leave shortly after midnight and paddle through the night. As usual, I couldn’t sleep because I was too excited.

11.30 came and we ran around in the darkness and set the boats up and did the final touches. We bought full day tickets for the vans and pushed off from the beach. It was really dark and if I remember it was a New Moon, so no moon.

We were in good spirits and we love a bit of adventure. The navigation stuff was done and our compasses set, with lights on the kayaks.

Long ships is easy to find because It has a light on it and it’s a lighthouse! So we got there, radioed the coastguard and let them know, they sounded confused and wished us luck. We cruised through the night and it was amazingly calm with a gentle rolling swell under the kayaks. It was really dark and after a couple of hours paddling we came into the shipping lanes, there were a few ships passing in all directions and we would navigate and alter our speeds depending on their port and starboard lights, it was hard to judge it but I made sure we both had a red or white light flare to hand, just in case a boat kept coming and we couldn’t avoid it. We made it across the shipping lanes but I’m not going to lie, it was pretty scary.

As we kept paddling and the time passed 4 am, the sea was still really calm and the night black. We could hear around us the sound of blow holes and whales and/or dolphins, we couldn’t see anything as we had both decided to paddle without a headtorch on, but it wouldn’t have helped. Headtorches create almost a bubble of light around the paddler and it wrecks vision. We kept paddling hoping a whale wouldn’t come up under us. Then the whole water lit up, I looked at glen and his bow wave was clearly visible and it looked like we had just reached a nuclear dumping site. The bioluminescence in the water was beautiful and it was like a dream, we cut through the glow for around 45 minutes.

We could see lights on the Scillies but we could not see land. Around 5.00 to 6.00AM I was struggling to stay awake in the kayak, often I would slip off into a semi sleep state and wake up quickly having not lost any paddle strokes which was weird. The gentle rolling swell, darkness and very warm air was like being wrapped up in a dream world. Luckily, the light increased and dawn broke. As it slowly got lighter we looked out and there it was, land! We had made it, just over six and a half hours and we paddled toward the Eastern Isles and continued towards St Martins, North Scilly Isles. There were seals every where and they escorted us into the beach where we made a bivvy, ate food and drank tea.

The plan was to have a couple of hours sleep and paddle back. We dragged a net out, which was on the beach and made a makeshift bed. We were awaken slightly later by a chap who thought we had been washed up and was checking we were okay. That was quite amusing.

We ate some more food and loaded the boats.

We pushed off from the beach in crystal clear, amazing water and paddled away from land again. The tidal diamonds were telling me that the tide would be against us on the way to the ship but I we wanted to see the light ship and that’s all that mattered!!

So we spent a while battling tide and it felt like we were on a big river- we made slow progress. Crossing seven stones reef the tide was stronger and there were small fish jumping out of the water, followed by a fin, there was a shark hunting and we watched it for a while, it must have been a mako or white tip oceanic because it wasn’t massive but it was really quick, that was cool!

When we made it to the lightship we checked the time. That had taken longer than we had thought. The tide pushing up over seven stones reef clearly speeds up and the data we had seen wasn’t correct. At some points we must have only been paddling around two knots.

The lightship was cool and we ate and drank and we watched the birds. After a small break we carried on paddling. The tide was still against us but we made slow progress. Crossing the shipping lanes we had the same issues but at least we could see them this time, so it was fine.

The forecast was for an easterly wind to pick up in the evening but the tide would relax. I knew that the wind would be hard to deal with after a long day so I tried to up the pace slightly. We could see land and we kept on paddling, I could also see wolf rock far to the south and I kept my eye on it and used it as a transit. Transit points far away are always a bit demoralising, as it seems that it’s impossible to pass them.

The winds came and they did take the last of our juice and left us feeling pretty exhausted, but we battled through and approached Sennen harbour.

Just after coming into the bay we watched a Hump Back whale cruise by and marveled at how high the spray went from its blow-hole. That was a beautiful end to the trip. We reached the slipway and we were tired. It was amazing trip and we were super happy. Some friends were waiting and took a photo and congratulated us. We put the gear away feeling pretty happy with ourselves. Sitting in the local chippy I said to Glen, I said; “What next?”, He said; “Bro, I’ve got a girlfriend, I’ve got to go”

Sitting in my van shortly after I asked myself, what next? Well the forecast looks OK, I reckon that Lundy and the Eddystone is possible! 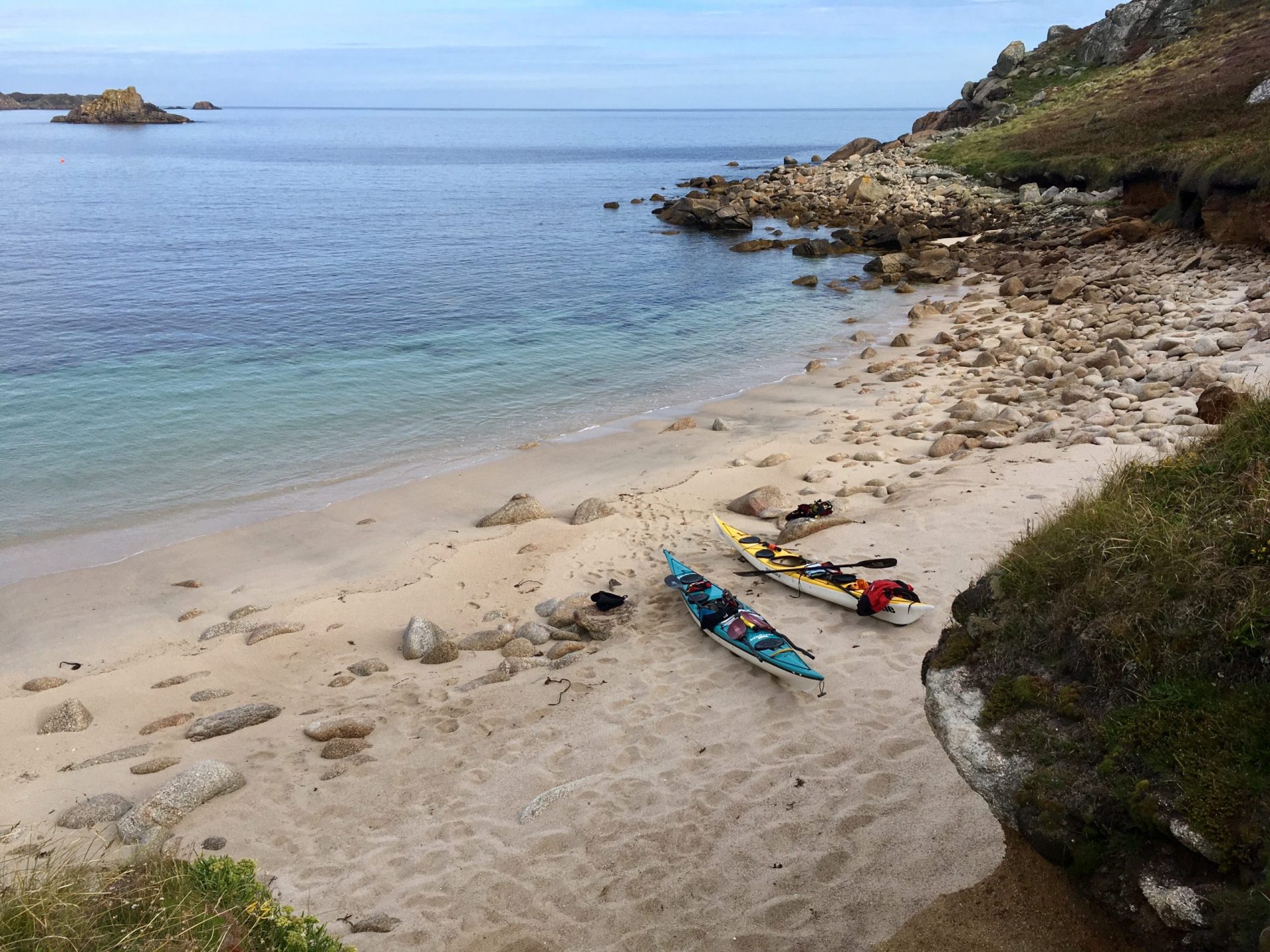 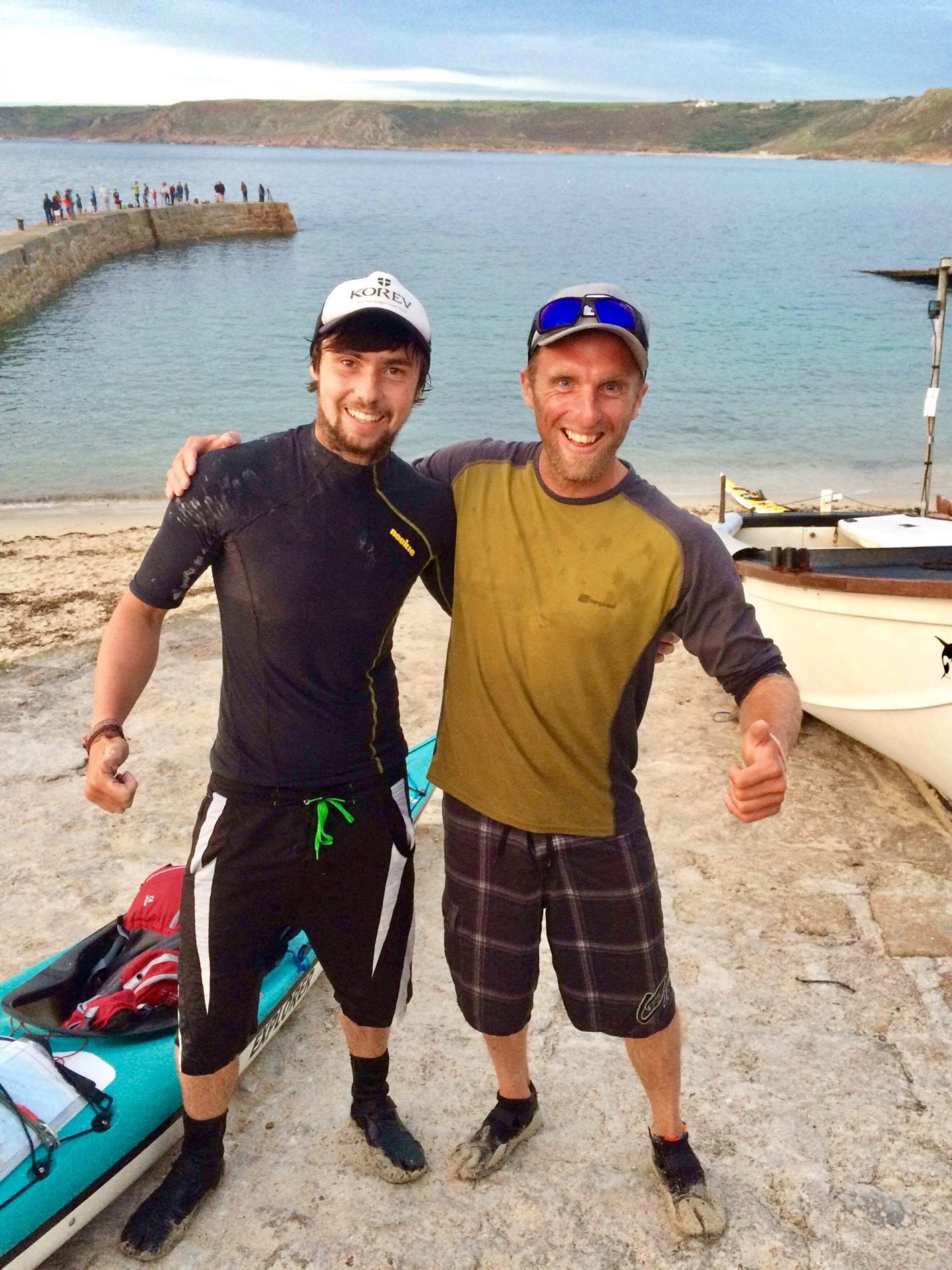 After a rest day and sorting gear I sat at Hartland Quay and looked out towards Lundy, It looked really cool and I was excited. I had planned the tides and all was fine. Lundy is a really good trip and different to the Scillies.

Tide moves across the paddler so a ferry angle is needed most of the time. Aiming off slightly for the whole crossing is pretty standard.

Pushing off from the beach at 6am and making it to Hartland lighthouse it was great to be on the water again. Feeling dialed with my explorer kayak.

The tide was running but it was manageable, crossing the shipping lanes and making good time I arrived at Lundy and cruised into the beautiful harbour area. Lots of visiting yachts were there the seals bobbed up and down. I explored a bit and then sat on the beach and waited for the tide window I had planned.

When the hour arrived I pushed off and began cruising back towards Hartland point. Lundy is a cool crossing because One can always see land.

Slowly as you approach either Lundy or the Mainland, more definition slowly reveals itself but its cool to be able to have solid points for navigation.

The way back was tougher as it usually is, the wind picks up through the day and that will mess the water up when it mixes with the tide. Making it back to Hartland quay, the beach was busy and it looked a tad different from early that day. But it was another amazing trip.

This particular time I was planning looking at the chart. The Eddystone is a pretty standard trip for me so lets makes it more exciting and interesting. The Eddystone Circuit was born!

I come from a climbing background and I have put up a few new routes. I love new routes and I think I’m the first to do this circuit. That was a great day! The birds just offshore are amazing and I had been wanting to go to Hand Deeps for a while. Great times.

So, that was the BIG three challenge and I completed all of the trips within five days. This particular week is what opened my mind to what is possible. A few months later I dedicated to FSK’s and distance paddling. In an FSK, this challenge is more than possible. All three in seven days/one week, give it a go! The BIG three challenge also really tweaked and honed my open water nav’ skills and I learnt a lot. The more I paddle the more I want to paddle!! 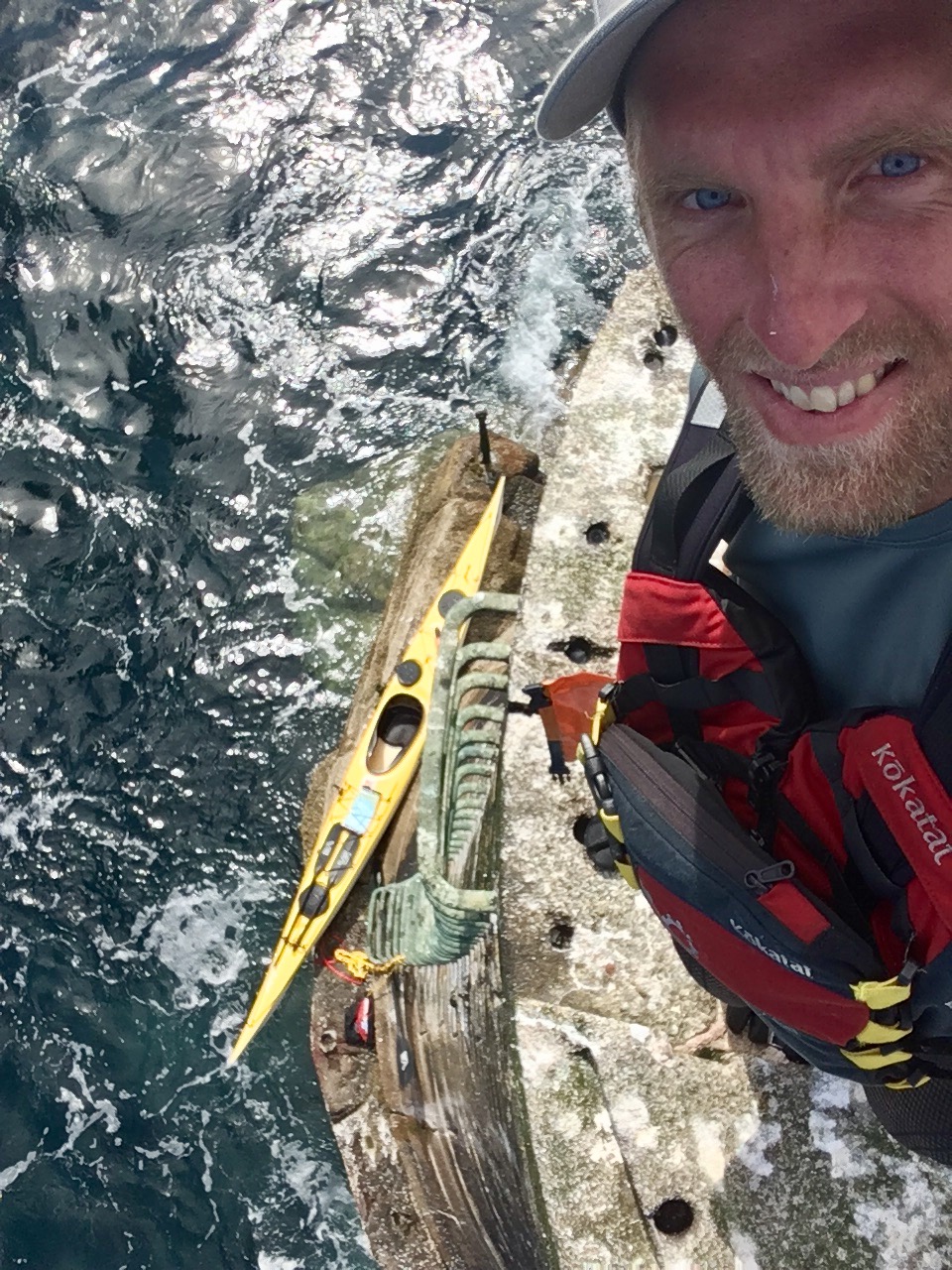 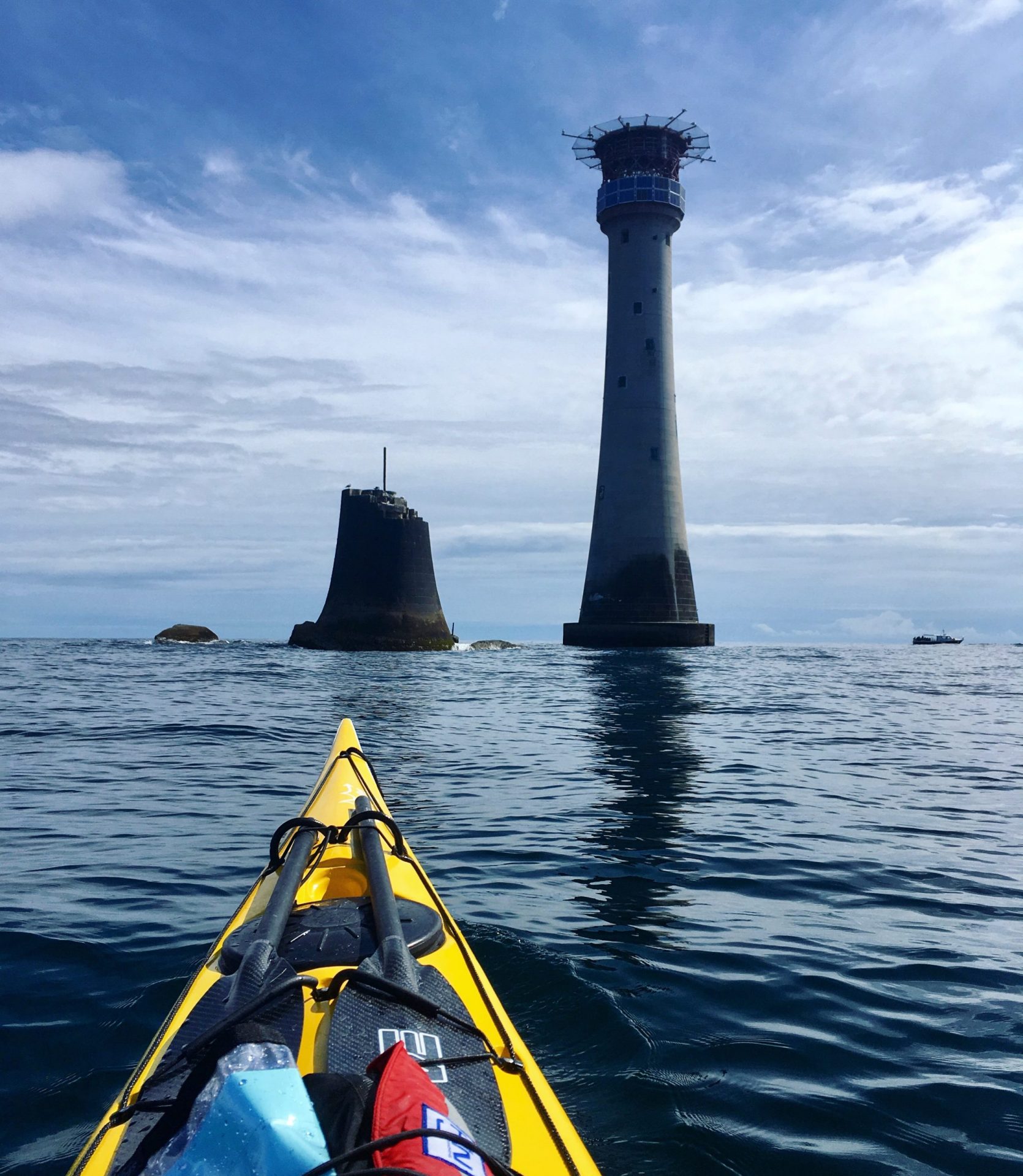